Like all of my reviews, this is only a user review and not a technical investigation 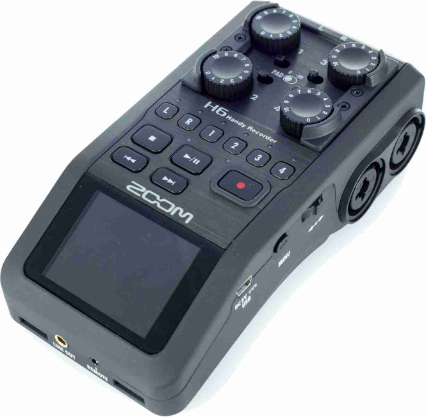 of the Zoom H6. Zoom have been quite innovative since the launch of the H4n model which became the recorder of choice for the low budget film maker market. Taking the feed back from users, Zoom launched the H6 along with a direct replacement for the H4n, the H5.

The H6 and H5 now are part of a modular system that allows different recording microphone modules to be attached to the main recorder, providing flexible recording options for the user. The H6 has been designed primarily with the film maker in mind, but is a very low cost option to enter the world of multi channel recorders. The Tascam DR680 was previously the lowest cost multi track recorder on the market until Zoom launched the H6.

The H6 is not much larger than the Zoom H4n, but has the option to record on six independent channels. With four TRS sockets, two on each side of the unit, all providing phantom power via XLR or 1/4” jack plugs, more professional microphones can be used as well as using the various microphone modules that Zoom make to attach to the front of the unit.

With four of the six recording channels used by the side sockets, the final two channels are used by the recording modules that attach to the unit. The modules include a mono shotgun style mic, a stereo shotgun mic, two more TRS sockets (without Phantom power), a MS stereo mic and a XY stereo mic. The MS microphone and XY stereo mic are included with the purchase of the recorder. All the other modules are sold separately.

The H6 has been designed for use while the recorder is attached to a DSLR or other video camera. As a result the now full colour display screen is slightly angled towards the viewer when mounted on one of the above options, but is still quite visible when the recorder is placed flat on the ground. The display is relatively small, so when recording all six channels, it requires a bit more concentration to see what is going on. The layout and menu options is quite similar to the previous Zoom software, just jazzed up a bit with colour icons. In bright sunlight it can be difficult to see the colour screen at certain angles. There are options in the menu to convert to a more basic monochrome screen which gives you better contrast in bright light.

Where a change has occurred is in the filing of the recordings. In previous Zoom models, each track recorded was placed into a single folder. Now with the H6, each recorded track is placed in it's own folder. Nobody really knows why Zoom decided to change this, but they have. Subsequent firmware updates haven't changed this either.

The right side of the recorder has the on/off/hold button, along with the menu button and rocker switch to operate the menu and two TRS input sockets. The left side along with the two TRS inputs has a 3.5mm headphone socket and volume control switch. On the front of the recorder under the display screen are a 3.5mm line out socket and a 2.5mm remote control socket. Above the display screen are the four dials operating the gain control for the side TRS sockets and the selector switches to choose your recording channel. The gain dials operate similar to that found on the Zoom H2n i.e are marked from one to ten, but also identically to the H2n, they do not have any locking mechanism to prevent accidental or unwanted movement to the dials. The hold switch could be used once the correct gain setting has been found, but this does not allow any adjustment quickly if needed. Next to each gain dial is a switch to allow a -10db automatic adjustment to each recording channel.

The gain control for each microphone module is already fitted to it and operates the same as the gain dials on the body of the recorder. As with those on the recorder body, there is no lock for the dial and a -10db switch if needed. The gain dial controls the gain for BOTH the two channels used by the module and cannot be adjusted independently of each other.

Some reviewers of the H6 have been concerned about the robustness of the connection to the additional recording modules. So far I haven't had any problems and if you are careful, I don't think you would get any.

The battery life is much improved over previous Zoom models and I have managed to record multiple hours of multi channel recordings using phantom power on all four channels. The H6 runs on four AA batteries or via an external power source. The external power connection to the H6 is via a 5v mini USB port, which allows you to attach external rechargeable battery packs designed to be used with mobile phones and other portable devices, as well as a mains lead (sold separately).

ndependent reviewers have claimed that the XY stereo mic module is very good and similar to the Rode NT4 microphone in quality. The MS microphone module is being described as noisy compared to it, but I haven't done any testing of these claims. Both the shotgun modules seem to be of a good quality as well, but I have no experience in using them.

So far I have been impressed by the H6. It is small, light weight with an excellent battery life with very impressive and flexible input options. It is much lighter and less battery hungry than my Tascam DR680 which has the same amount of inputs (six). Where the Tascam still wins is by having an option to gang the gain controls of each channel together to allow simple adjustment of all the microphones on one knob, plus all six channels have phantom power available. With the H6 each gain dial has to be altered separately, which is a bit awkward when recording a double MS set up for example. I hope Zoom address this problem in a future firmware upgrade. If they do, then I think it is quite close to being the best introductory all round recorder out there on the market considering it's recording input options, modular microphone system, size, battery life, performance and especially cost. It can be found for around the £330 mark, considerably cheaper than a Nagra or Sound Devices model.

Recently I left it out over night, wrapped in a plastic bag, for about 4 days running while I was trying to record multiple Storm Petrel burrows simultaneously. It performed flawlessly despite very damp and wet conditions and the occasional trampling by a Manx Shearwater (electrical tape was used to fix the gain dial position luckily).

The H6 can use external battery packs to supplement the 4 AA batteries that it uses via the micro USB input on the side of the unit. Battery banks/packs from companies such as Anker that are used for charging mobile phones are a low cost alternative at around £20 on Amazon.

Linked with an external mixer, the H6 would provide a very flexible and powerful set up, providing plenty of connection and powering options. I hope in future firmware updates Zoom will provide a way of locking the gain dials and hopefully a way of ganging the gain dials together. The Zoom H5 which is an upgrade of the Zoom H4n, has a bar to protect the gain dials from accidental knocks, but I hope they come up with a better, more robust solution that involves a physical lock.

The multi channel recorder market is rapidly changing at the moment, with new models appearing all the time. The functionality and quality is getting better with the prices getting lower and lower. Zoom have been very innovative with their recent models and although more biased towards recording of music and

video, which means their pre amps haven't been as quiet as us wildlife sound recordists would like, they produce very functional recorders at a very good price point. They have released the Zoom F8 and F4, which look on paper to be a serious challenge to the Sound Devices/Nagra level of quality and manufacture for half the price. Tascam have also released some multi channel recorders aimed at the digital video DSLR market, so choice and prices are getting better all the time whichever brand you look at.

Owning three, actually that will be four when my Zoom H1 arrives, Zoom recorders may make me look a Zoom fan boy, but I just find the recorders well specified, good value and just right for my needs. They tend to be innovative in what they produce and now with an attempt on the higher quality end of the market with the Zoom F8 and F4, I think perception of Zoom will start to change. Even the H4n has been respecified to the H4n Pro with the same lower noise preamps of the H5 and H6.

Full specifications are available at: